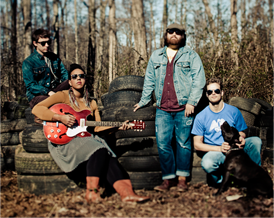 The band originated when lead singer-guitarist Brittany Howard and bassist Zac Cockrell, both then attending East Limestone High School near Athens in Limestone County, Alabama, began meeting after school to write songs. The two played progressive rock and other genres, but soon found a calling playing roots rock. They approached drummer Steve Johnson, who was working at a local music store, asking him to join the band and soon the trio went to Clearwave Recording Studio with producer Jeremy Stephens in Decatur, Alabama, to record some of the songs they were writing. Guitarist Heath Fogg joined the band after hearing the demo.

Although they had been working on original material, they worked up cover songs by Led Zeppelin, James Brown, Otis Redding, AC/DC, and others to fill a “one show only” 45-minute set, under the name The Shakes. The band later added Alabama to their name to differentiate themselves from other bands called The Shakes. Alabama Shakes released the four-song EP Alabama Shakes September 2011, which gained media attention (including by NPR), and earned them an invitation to play at the CMJ Music Marathon industry showcase in New York.

The successful CMJ show in October 2011 caught the attention of Jon Pareles of The New York Times, who praised Howard’s singing (comparing her to Janis Joplin) as well as the band’s energy and musicianship. The clarity of Howard’s presentation of the lyrics is distinctive. In late 2011, the band’s song “You Ain’t Alone” was used in a Zales jewelry ad and Alabama Shakes made MTV’s list of Eleven Artists To Watch In 2012.

In the span of less than a year, the band went from virtual obscurity to playing venues such as the historic Ryman Auditorium in Nashville, Tennessee and in Los Angeles, the Troubadour and Music Box Theater.

The band’s first full-length album, Boys & Girls, was made available in its entirety for live streaming from the Internet on April 1, 2012. In June 2012, the band played a closing set for the first night of the 2012 Bonnaroo Music & Arts Festival. In July of that year, the band also performed at the Newport Folk Festival. “Boys & Girls” was awarded Gold Record status by the RIAA for sales of over 500,000 in the United States on March 13, 2013