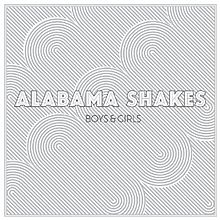 Boys & Girls is the debut studio album from American rock band Alabama Shakes. It was released on April 9, 2012. The album peaked at number 8 on the U.S. Billboard 200 and number 3 on the UK Albums Chart.

The album has been well received by critics. Gavin Haynes of NME gave Boys & Girls a positive review, stating, “In many ways Boys & Girls it is as note-perfect an album as you’ll hear all year, yet it’s also often perfectly inert. Their new bessie Jack White flagrantly copied vast chunks of the past, but in so doing he also stripped it down and rebuilt it in his own image. Despite their obviously vast talent, still less than a year after they first read about themselves on the internet, the stellar rise and rise of Alabama Shakes possibly hasn’t afforded them quite enough time to find out who they really are.

Los Angeles Times also gave the album a positive review stating, “The Alabama Shakes’ first album, “Boys & Girls,” is an electric jolt that anyone who loves blues-based rock music should track down immediately. Consisting of three men and one young explosion named Brittany Howard on vocals and guitar, the group, which formed in northern Alabama in 2009, offers stripped down truth, minus any affectation, histrionics or irony.